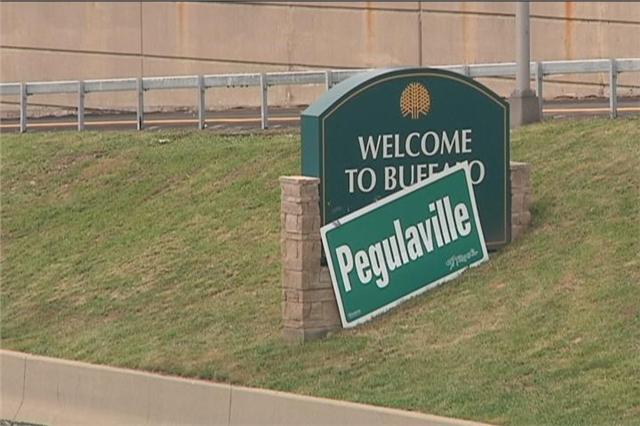 Admitting it was a dream come true, Terry Pegula and wife Kim were unanimously approved by NFL owners Wednesday as new owners of the Buffalo Bills.

The Pegulas, who already own the NHL’s Buffalo Sabres, expect the sale to be finalized by the end of the week.

“This is a significant step in us owning the team.” Terry Pegula said. “There’s a small matter of having to pay some money and we’ll get that done.”

The vote took place in New York City, where NFL owners are meeting. Pegula said he wouldn’t take questions after making his statement, however, he did respond to some questions shouted by reporters at the end of his availability.

“If you had asked me 10 years ago if I would own the Bills and the Sabres, I’d have called you a liar,” he said.

The Pegulas finished ahead of competing groups fronted by rock star Jon Bon Jovi and billionaire Donald Trump to buy the Bills, acquiring the franchise from the family of late owner Ralph Wilson, who died in March, for $1.4 billion.

Asked if he got a good deal, Terry Pegula replied: “I got a hell of a deal. I own the team.”

After the 31 other team owners voted in favor of the Pegulas, the couple received a warm ovation. Their purchase also was lauded by New York politicians.

“Today, all of western New York can yell out, ‘Touchdown!’ because we have secured long-term owners for the Bills who are fully committed to keeping the team in Western New York for generations,” Sen. Charles Schumer said.

“Over the course of these past few months, I spoke regularly with the NFL and with a number of owners and conveyed my belief that the Pegulas, with their Buffalo roots, were fully committed to the Bills’ future in western New York and the right pair to carry on Ralph Wilson’s legacy. The owners have made an excellent decision in unanimously approving the Pegulas’ ownership of the team, and I am confident Terry and Kim will be excellent stewards of this next chapter in Bills history.”

In order for the Pegulas’ purchase to be ratified, three-quarters of the league’s 32 owners, including Wilson’s estate, had to approve the sale.

Under NFL ownership rules, the Pegulas are allowed to own both the Bills and the Sabres because the franchises are in the same market.

Kim Pegula is expected to have a high-ranking role with the Bills, working alongside current team president Russ Brandon.

Terry Pegula has a net worth value of more than $3.5 billion, and he made his fortune in the natural gas industry. In 2010, he completed a deal to sell a large portion of his company East Resources’ assets for $4.7 billion to Royal Dutch Shell.